Series: From idea to app - The cost of skipping steps of the development lifecycle

Skipping any step of the development lifecycle does not mean that your application will be not functionally working. At MobileThinking we ensure the best quality independently on your choices before the actual app development. You can simply come and tell us what to do and we will deliver. However, at the end you might have an app that users do not want to use. To come back to hour housing example, if you are a real estate agency, you are not going to build a house in the middle of the Sahara desert or a house without water pipes. No one, unless crazy, will ever buy it. Following the development lifecycle will prevent you these big and costly mistakes.

The steps of the development lifecycle require different investments of time and money but the investment is not necessarily proportional to the importance of a step. Step 1 and 2 (1. Analyse, 2. User journey, Wireframe, Prototype, and Test) are crucial to reduce the costs of subsequent steps (particularly for the Development phase) and the overall success of the project. You should dedicate at least 10-20% of your budget on these first two steps otherwise when your app hits the market you will be nicely disappointed that no user uses your app. Putting effort in the early stages pays in the subsequent ones. You can prevent to invest too much money and time and with a bit of luck you will be different and better than your competitors.

From our point of view, the costs of mistakes in the conception of an app are proportional to at least two factors: 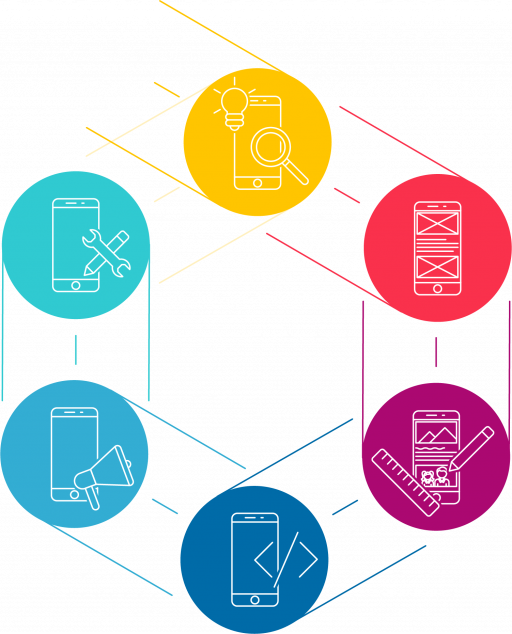 Development cycle - The cost of skipping steps of the development lifecycle
Earlier you spot a mistake easier and less costly is to fix the problem. For example, by testing your prototype (e.g., made in Powerpoint) with your future users you can discover that they can’t understand some of the steps of your core functionality. If you had developed that functionality in a real and finished app already published in the app stores you would have lost a lot of money and time (not to mention the costs and time to fix it afterwards). Instead in the case of the prototype, a few more hours of work on the Powerpoint slides and few test runs later you are ready to develop the app that users will use and understand. For example, when planning the house of your dreams, it is easier to iterate over the architectural plans with your architect before to start to build the house rather than demolish and rebuild parts of it once it is finished.

The second factor is about the complexity of your app when you deploy it in the app store for the first time. More features mean more development time and therefore a bigger investment of money and time. This approach forces you to spend a lot of money upfront probably for nothing. You have the high risk to miss your market niche of users. If your app does too many things, but no one of them answers to user needs, you fail. Or worse you did a very good job with your core functionality but you drowned it with nice to have features making your app too hard to understand so no user will adopt it. In the context of a real estate agency this mistake might be equivalent to build a villa full of nice features (a swimming pool, a big garden, and more) in a city in which no one can afford to pay to buy it or to maintain it.

To conclude this section we would like to highlight that beside getting right the first steps before the development you have to ensure to have the resources (time and money) for the phases after the development. The application market is a really competitive one (check here for some statistics on the B2C market of applications), so to stand out from your competitors you need to promote your application and be ready to maintain it and evolve it at a fast pace. Thus the importance to have a budget ready for the promotion step that should account up to 30%* of the total budget at your disposal.

At MobileThinking we are not oracles but we can help you avoid big mistakes that can jeopardize the success of your app from the very beginning.
* It depends on the market niche your product will be, the growth objectives you have, and the growth strategy you intend to adopt.

Our series of articles on the mobile application development lifecycle continues. Discover our conclusion at the end of the week. Leave us your email address to be kept informed as soon as the next articles are available or follow us on LinkedIn.